As the weather heats up, there’s no better time to enjoy your favorite summer treats with balance in mind. Some of our favorite candy memories are tied to summer fun!

Taffy has been part of American life since the late 1800s and has been a beach-side tradition since it appeared in Atlantic City more than 100 years ago.

Many manufacturers claim a shopkeeper named David Bradley was one of the first sellers of the candy. In 1883, a huge storm hit Atlantic City and flooded the boardwalk. Bradley’s store was flooded and the ocean water soaked his entire stock of taffy. In one account, a young girl asked if the store still had taffy for sale. Bradley jokingly told the girl to grab some “salt water taffy.” This is believed to be the first reference to salt water taffy.

Joseph Fralinger is credited with popularizing salt water taffy after he observed sunbathers and boardwalk visitors and came up with the idea to sell the treat to tourists as a souvenir of their vacation to Atlantic City. Although it started as an experiment, Fralinger boxed the candy to great success.

The competition was not far behind Fralinger’s success. Enoch James became Fralinger’s biggest competitor around 1900. The James family moved from the Midwest to Atlantic City after hearing about the salt water taffy craze. James located his store near Fralinger’s shop on the boardwalk, and each shop used different recipes to advertise to visitors.

By the 1920s, salt water taffy was at the height of its popularity. More than 450 manufacturers were making and/or selling the candy at that time. In the early 1920s, John R. Edmiston obtained a trademark number for the term “original” salt water taffy. After obtaining the trademark, Edmiston then asked the larger taffy companies for a share of their profits because they were using his trademarked name. The James brothers sued Edmiston over the use of the term ‘original’ salt water taffy. In 1923, the Supreme Court ruled the confection had been around too long and used by too many people to claim royalties off of the “original” title.

Today, salt water taffy is commonly found on the Eastern seaboard and is a popular treat for people to bring home after visiting one of those beaches.

How is salt water taffy made?

The original process of making salt water taffy dates back more than 100 years. Skilled pullers would hang 10 to 25 pounds of taffy over hooks. When the taffy reached five to six feet in length, it would start to fall off the hooks. The puller would pick the taffy up and put it back over the hook, listening for certain noises to keep the taffy soft and less sticky. A similar process is still used today when making homemade taffy.

Most taffy recipes contain sugar, corn syrup, butter and some varying ingredients. The ingredients are melted down in kettles at a temperature between 250 to 270 degrees. The lower the temperature, the chewier the candy, and the higher the heat, the more brittle the candy. The ingredients are then cooled on a marble slab or pan, and then the pulling process starts. The process of pulling the taffy over and over incorporates air into the mixture, giving taffy its unique texture.

When the taffy becomes harder to pull, it is cut into pieces with greased scissors. Taffy should be stored in airtight containers to keep out the moisture. If any moisture gets into the candy, it will become very sticky.

The modern manufacturing methods have changed the way salt water taffy is made. Today’s taffy is cooked in large stainless steel or copper kettles and then vacuum cooked a second time. The pulling and packaging is now done with machines, allowing for more efficient taffy production.

History and Making of Marshmallows

As early as 2000 BC, Ancient Egyptians were the first to enjoy the gooey treat now called marshmallow. The treat was considered very special, and it was reserved for gods and royalty.

The French were introduced to marshmallows in the early to mid-1800s. Owners of small candy stores whipped sap from the mallow root into a fluffy candy mold. This time-consuming process was typically done by hand.

In the 19th century, marshmallows were made by mixing mallow root sap, egg whites and sugar into a fluffy mold. The French added cornstarch to speed up production and give the candy its unforgettable form.

Today, the manufacturing of marshmallows is different. Mallow root sap has been replaced by gelatin. Corn syrup, starch, sugar and water are mixed with the gelatin. The fluffy mixture is piped through long tubes and then cut into equal pieces. To create shaped marshmallows like Peeps, a special nozzle moves back and forth to cut the marshmallow into recognizable shapes.

Marshmallows were introduced and popularized in the United States in the early 1900s, after the new manufacturing process was developed. Marshmallows are considered a year-round treat even though the majority are sold during October and December.

No one knows who started the tradition of roasting marshmallows, but in 1927, the Girl Scout Handbook was the first documentation of the recipe combining marshmallows with chocolate and graham crackers.

The Girl Scouts organization was likely responsible for naming the treat. The term s’more allegedly stands for “gimme some more.” 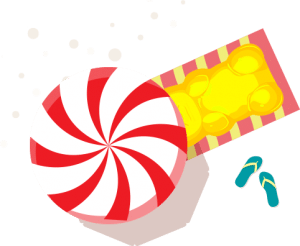 Back to National Candy Month Central

Join us on our journey

If you’d like to be updated on our progress,
fill out the form below: